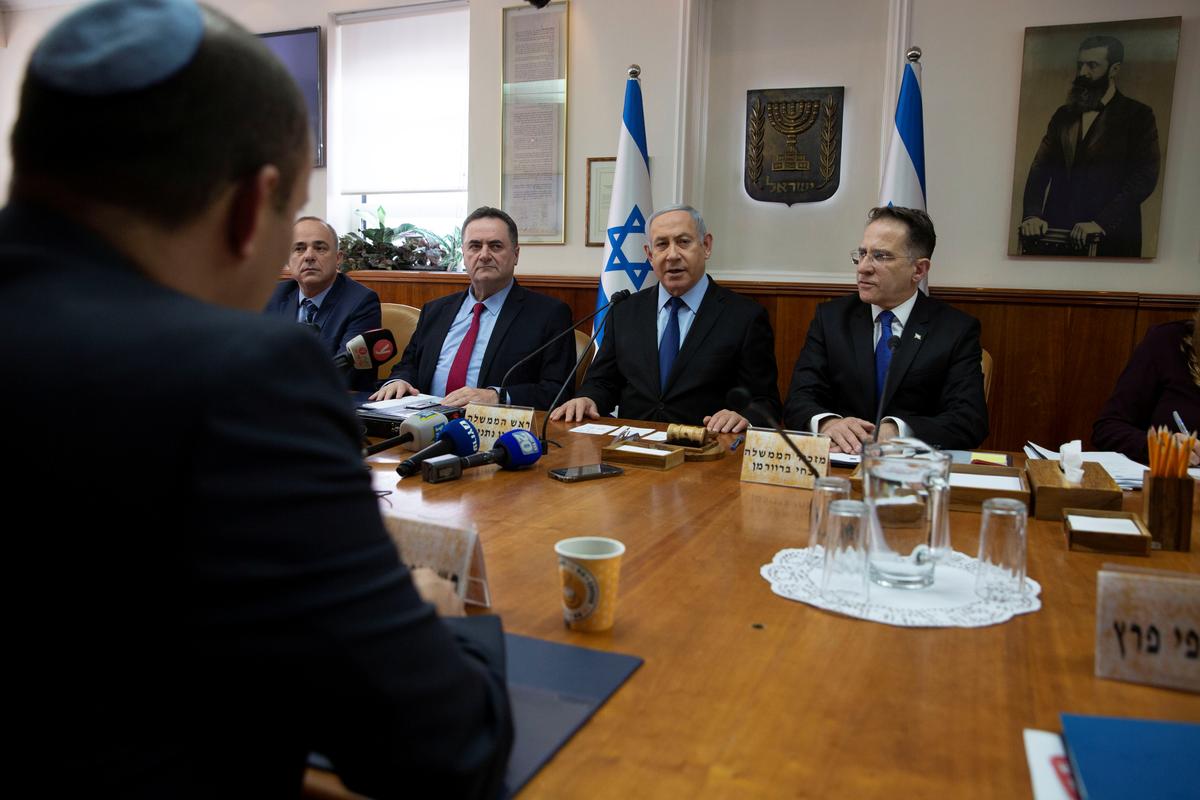 JERUSALEM (Reuters) – Israel’s top court on Sunday dismissed a petition to order Prime Minister Benjamin Netanyahu to step aside after his indictment on corruption charges.

The four-term conservative leader has pushed back against the indictment and also a challenge from within his ruling party by projecting business as usual, touring the country’s northern frontier and ramping up rhetoric about Iranian threats.

Netanyahu’s indictment on Thursday came amid political disarray in Israel, after neither Netanyahu nor his main challenger, centrist Benny Gantz, secured a majority in parliament in elections in April and September.

Netanyahu has denied the charges of bribery, fraud and breach of trust and said he will stay in office and defend himself.

Gideon Saar, a rival within the Likud party has challenged Netanyahu saying he would not be able to win another election and called on Likud to hold a leadership ballot.

The Movement for Quality Government in Israel, which petitioned for Netanyahu to step aside, said in its filing to the Supreme Court that the first criminal charges against a sitting prime minister constituted “the crossing of a red line and a grave blow to public trust in ruling institutions”.

The court, however, dismissed the petition to force Netanyahu to resign or temporarily recuse himself from office. It said the watchdog had not yet exhausted other avenues, such as petitioning Netanyahu directly and Israel’s attorney general.

For his part, Netanyahu kept his focus on security and toured the Golan Heights with top military brass.

“I am doing everything needed to carry out government work, cabinet work … in all necessary ways, to ensure the security of the citizens of Israel and the things that are crucial for Israel,” he said in a video statement.

He reiterated concerns over Iran’s attempt to entrench itself militarily in a number of Middle East countries and said Israel “will act to prevent Iran’s attempt to make Iraq and Yemen bases for rocket and missile launches against Israel.”

Gantz’s mandate to form a government – after an unsuccessful attempt by Netanyahu to do so – expired on Wednesday. The next day, Israel’s president declared a three-week period in which lawmakers can nominate one of their own to try to put together a ruling coalition.

Should that fail, a new election – Israel’s third in a year – will be triggered.

Netanyahu’s hope of securing that parliamentary nomination was challenged by Saar.

“There is only one way in which we can save the country, extricate it from the crisis and ensure the Likud’s continued rule – and that is if we go to snap primaries today, within these 21 days,” Saar told Israel’s Channel 12 television.

A less adversarial proposal was launched by a second Likud lawmaker, Nir Barkat, who called for nominating a deputy to Netanyahu who would take his place should he be forced to take a leave of absence.

The head of Likud’s central committee, Haim Katz, said he would meet with Netanyahu to decide on the two proposals.

Saar has previously said he would consider running for the top Likud slot.

While voicing appreciation for Netanyahu’s record-long term and noting he was innocent until proven otherwise, Saar criticized the premier’s attempts to cast his criminal prosecution as a “coup attempt” involving police, prosecutors and the media.

“Not only is it wrong to say that, it’s also irresponsible to say that. It’s completely out of touch,” Saar said.

“It is sad to see that while Prime Minister Netanyahu keeps Israel safe on all fronts and works to preserve Likud rule, Gideon Saar, as is his wont, is displaying zero loyalty and maximum subversion,” the spokesman said.