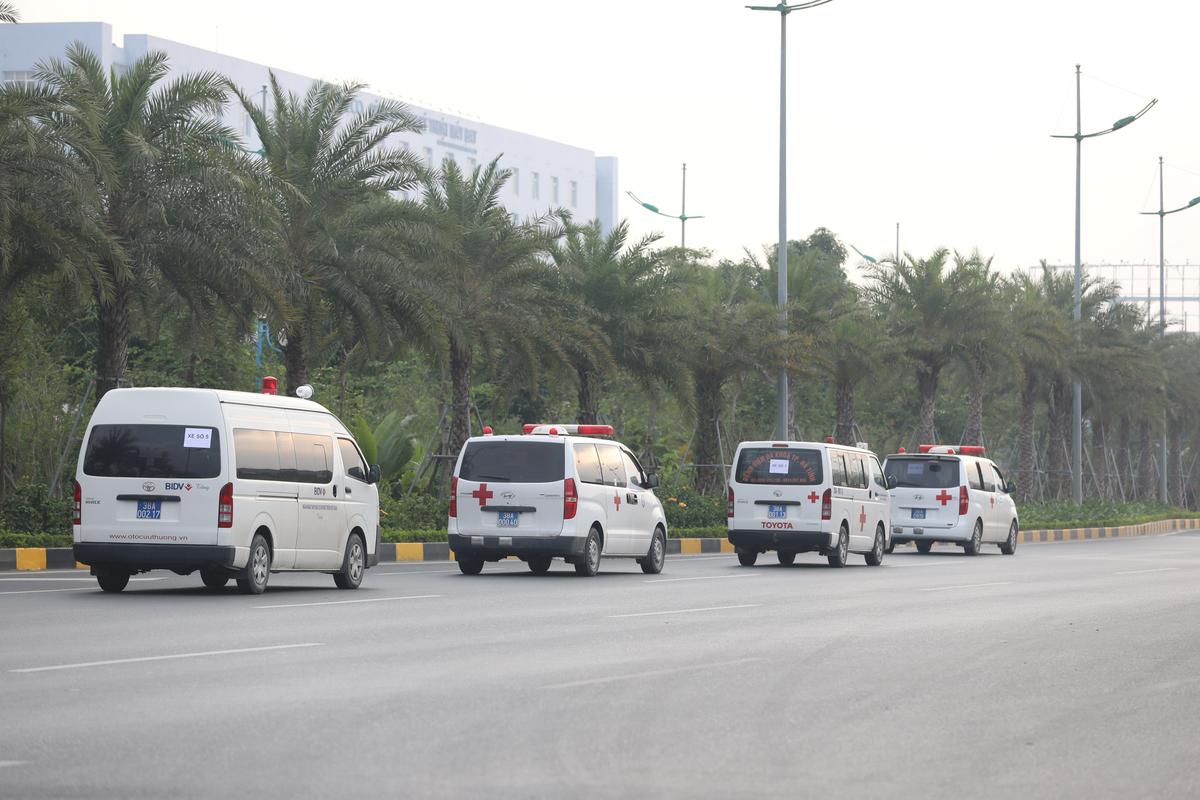 NGHE AN, Vietnam (Reuters) – With tears in their eyes and white roses in their hands, friends and relatives of the 39 Vietnamese people who were found dead in the back of a British truck last month sobbed as the first bodies to be repatriated arrived in rural Vietnam on Wednesday.

Ambulances from Ha Tinh province are seen while allegedly carrying some of the bodies of victims on 39 deaths on a truck container in UK, leave Noi Bai airport in Hanoi, Vietnam November 27, 2019. REUTERS/Stringer

The bodies of 16 victims arrived in the Southeast Asian country in the early hours of Wednesday morning, Vietnam’s foreign ministry said in a statement.

“After waiting for so many days, my son has finally arrived,” Nguyen Dinh Gia, father of victim Nguyen Dinh Luong, told Reuters.

Under grey and rainy skies, a parade of ambulances snaked through crowds of mourners in the rural town of Dien Chau, Nghe An province, from which some of the victims began the doomed journey.

Five of the 16 bodies would be returned to Nghe An on Wednesday, an official there said.

“We are deeply saddened, but we have to hold back the emotion to organize the funeral for my son,” Gia said by phone from neighboring Ha Tinh province, where another 10 victims were from.

Cloth-wrapped coffins arrived at Hanoi’s Noi Bai Airport early on Wednesday and were loaded into the back of a fleet of waiting ambulances, state media showed.

The bodies would be taken to the homes of their next of kin in Nghe An, Ha Tinh and Quang Binh provinces, the foreign ministry said.

Vietnamese and British authorities continued to coordinate to repatriate the remaining bodies, it added without giving further details.

Police in Vietnam have arrested 10 people in connection with the deaths. On Monday, the British driver of the truck admitted plotting to assist unlawful immigration and acquiring criminal property.

The grisly discovery last month on an industrial estate near London, a magnet for Vietnamese migrants, has shone a spotlight on the people-smuggling trade bringing the poor of Asia, Africa and the Middle East on perilous journeys to the West.

In Vietnam, poor job prospects, environmental disasters and the promise of financial rewards are all factors pushing people to leave.

Even though the cost of getting to Europe can run into thousands of dollars for migrants ready to pay for a so-called “VIP” service, they believe they can make enough money to justify the risk.

FILE PHOTO: A man lights a candle at a make shift memorial at a fundraising event organised by Britain’s Vietnamese community to raise money for the families of the 39 people found inside a container, at a conference venue near Wolverhampton, Britain November 24 2019. REUTERS/Phil Noble

Families of the victims, all aged between 15 and 44, have been plagued by confusion and anguish over how to get the bodies home.

The families would have to pay for the repatriation of the bodies, costing up to 2,208 pounds ($2,830) each, according to a foreign ministry statement seen by Reuters.

The Nov. 14 statement said the Vietnamese government would advance the payment, which families could repay later.