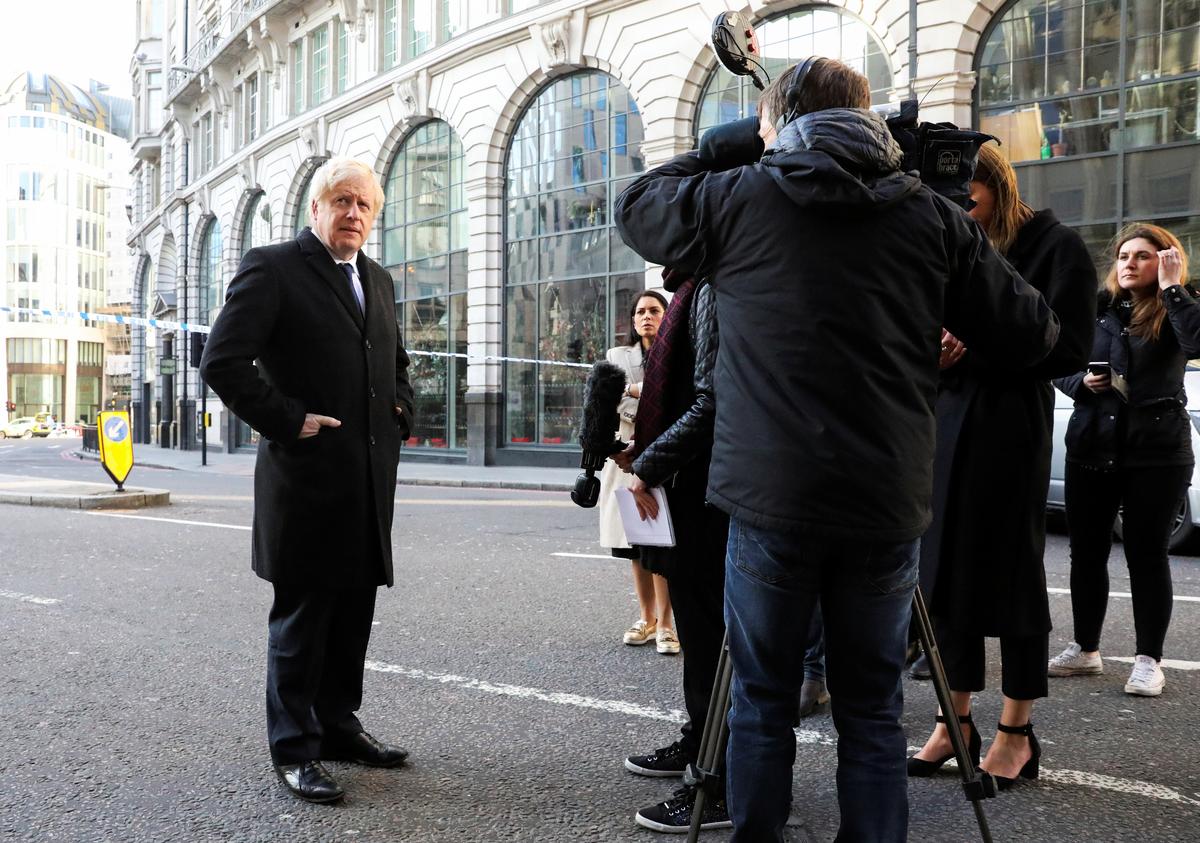 LONDON (Reuters) – Prime Minister Boris Johnson said on Sunday he would strengthen prison sentences, vowing to boost security after an attack in the British capital by a man convicted of terrorism who was released early from prison.

Britain’s Prime Minister Boris Johnson speaks to the media at the scene of a stabbing on London Bridge, in which two people were killed, in London, Britain, November 30, 2019. REUTERS/Simon Dawson/Pool

With less than two weeks before Britain heads to the polls, law and order has raced to the top of the election agenda after Usman Khan, wearing a fake suicide vest and wielding knives, killed two people on Friday before being shot dead by police.

Johnson’s Conservatives have championed tough police and prison measures, but opponents have criticised the governing party for overseeing almost a decade of cuts to public services.

Johnson said if he won the Dec. 12 election he would invest more money in the prison system and make sentences tougher.

“We are going to bring in tougher sentences for serious sexual and violent offenders and for terrorists,” he told the BBC’s Andrew Marr show.

“I absolutely deplore the fact that this man was out on the street, I think it was absolutely repulsive and we are going to take action.”

He was keen to portray his rival for prime minister, Jeremy Corbyn, as being weak on crime, blaming the Labour Party for bringing in a law that automatically released some prisoners early when it was in government more than a decade ago.

Johnson said there were probably about 74 people convicted of serious offences who had been released under the legislation, adding that they were being monitored to ensure there was no threat to the public.

Corbyn said Conservative cuts to community policing, the probation service, mental health, and youth and social services could “lead to missed chances to intervene in the lives of people who go on to commit inexcusable acts”.

“You can’t keep people safe on the cheap,” he said in a speech on Sunday.

Khan’s attack on a Friday on London Bridge stirred memories of Britain’s last election in 2017, when three militants killed eight and injured at least 48 in the same part of the capital.

Bystanders on Friday wrestled Khan to the ground before the police shot him dead. So far the police have found no evidence to suggest Khan was working with others.

Both of the people killed were Cambridge University graduates. One has been named as Jack Merritt, who worked for the group that organised a prisoner rehabilitation conference attended by Khan before his attack.

The other victim, a woman, was a former student at the university, its vice chancellor said on Sunday.

Two people remain in hospital in a stable condition. A third person left hospital on Sunday.

The attack brought a sombre tone to what has often been an ill-natured election campaign, which is presenting voters with a stark choice – Labour’s promise to raise taxes on the rich and businesses to fund a much expanded state or the Conservatives’ pledge to “get Brexit done” and move onto other issues.

While Corbyn’s team struck a moderate tone, with his top legal policy adviser Shami Chakrabarti questioning whether it was the time to make “knee-jerk” policy changes, Johnson again said only he could deliver Brexit, allowing Britain to turn to reforms such as to the criminal justice system.