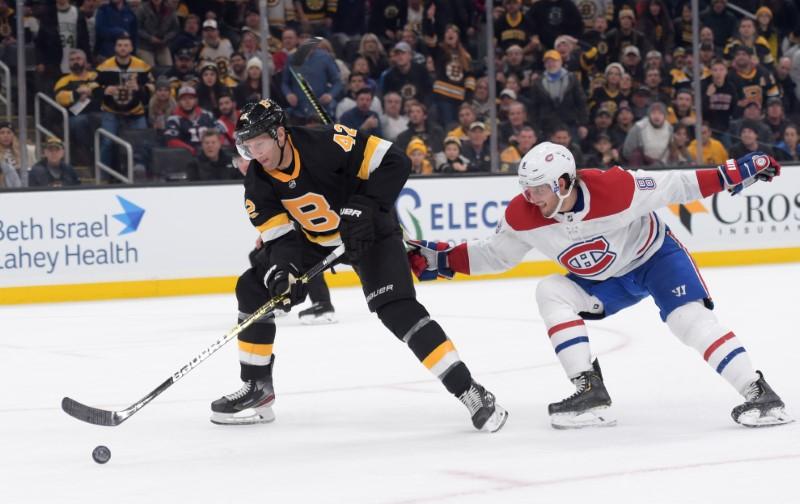 David Backes scored the game-winner during a three-goal surge in the third period, as the Boston Bruins rallied past the visiting Montreal Canadiens 3-1 Sunday night.

David Pastrnak and Jake DeBrusk also tallied in the third, as the Bruins extended their winning streak to seven straight and their points streak to 11 (8-0-3). Tuukka Rask stopped 28 shots in net to help Boston remain undefeated in regulation at home (11-0-4).

Joel Armia scored for the Canadiens, whose losing streak extended to eight games (0-5-3). Carey Price had 31 saves and carried a shutout into the third period before the wheels came off.

Pastrnak tied the game at 1-1 with a wicked one-timer from the right circle off the post at the 6:16 mark of the third. Pastrnak, who had a hat trick in a rout of Montreal five days prior, extended his league lead in goals to 25.

Leon Draisaitl’s second goal of the game early in the third period was the winner as Edmonton won at Vancouver to split a home-and-home series on consecutive nights.

Oilers goalie Mikko Koskinen made 30 saves and earned the victory thanks to Draisaitl’s marker 46 seconds into the final frame, his second power-play goal of the night. While the defenders were focused on his teammates, Draisaitl found a soft spot at the bottom of the right circle and quickly released the shot after taking a feed.

Draisaitl and Connor McDavid — who collected two assists — both reached the 50-point mark. They are the first Oilers teammates with 50 points prior to the 30-game mark since Wayne Gretzky and Jari Kurri in the 1984-85 season.

Minnesota captain Mikko Koivu, playing in his 1,000th career game, scored the winner in the fourth round of a shootout as the Wild defeated visiting Dallas.

John Klingberg and Blake Comeau tallied and goaltender Ben Bishop made 27 saves as the Stars dropped their third game in a row.